Canoe’s culinary tribute to the Galapagos of the North, connecting people and place. 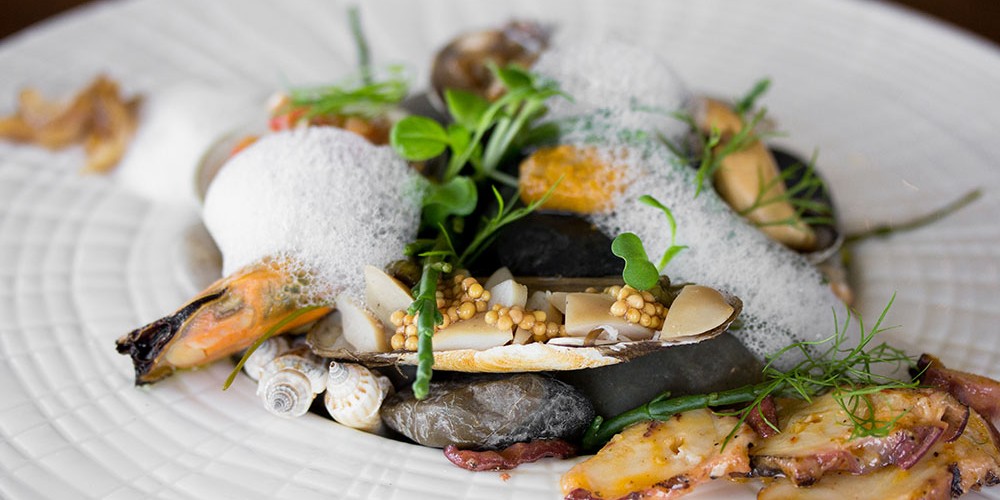 Featuring ingredients like side stripe shrimp, razor clams, and smoked white salmon, this limited time tasting menu aims to commemorate the lives and culture of the Haida Gwaii people, and pay homage to this special place and time in Canada’s ongoing story.

Often referred to as the “Galapagos of the North”, Haida Gwaii is a chain of over 200 islands located 100km west of British Columbia’s northern coast. Perched on the edge of Canada’s Pacific continental shelf, Haida Gwaii is the most isolated land mass in the country.

With over 5000km of coastal shoreline, Haida Gwaii is home to a bounty of diverse marine life; from whales and seals to sockeye salmon and halibut. Over one-half of the province’s sea lion population resides in the nutrient-rich waters of Haida Gwaii. Haida Gwaii’s terrain ranges from high alpine meadows to rugged mountains to lush forests, which provide a cool, moist climate ideal for many species of plants, flowers, and trees.

In addition to the region’s dramatic landscape, the Haida people are renowned for having formed one of the most complex and sophisticated societies over thousands of years ago. Haida ancestors are distinguished for their superb fishing and hunting skills, as well as their almost ethereal connection to the Pacific Ocean. Fish, shellfish and sea mammals were part of their essential diet, rounded out by berries, roots, eggs and birds.

Today, the Haida people still enjoy the traditional seafood delicacies of their homeland, from k’aaw (herring roe on kelp) to razor clams.